For a 600 million row table that can take a while. Here's a little salt for the wound. Multiple tasks in query compilation may load the filtered index stats - for example if the first key of the index is in an "col=X or col=Y or col=Z" situation. Each task that loads the filtered index will result in another quickstats query - the amended histogram isn't retained from one task to the next while the plan is compiling. Even if there is no change to the underlying data in the interim. Takes 3 minutes to complete a quickstats query due to a full table scan? And there's 6 of them? Just added 18 minutes to the query compile time. Yikes.

And the next query against the same data and statistics runs into the same behavior.

Check out Michael J Swart's connect item, and the repro details behind the "Details" link in the connect item. Notice in his results... the quickstats query for the filtered index doesn't have the expected filter.

In this blog post, I detail my theory that SQL Server 2014 SP1 CU9/SP2 CU2 kb3189645 significantly changes behavior in these cases by exempting filtered indexes from quickstats queries.


***Update 2016 Dec 9***
Trace flag 4139 is part of the stew, as is the legacy cardinality estimater.
Forcing new cardinality estimater with QUERYTRACEON 2312 allowed fast compile.
So did global disable of trace flag 4139 - even though trace flags 2389 and 2390 remained enabled.
Brute force method - manual update of ALL stats on the table (which was unchanging during these tests) also allowed fast compile.

If this issue isn't reproducible again tomorrow I'll be upset.  Hoping to finally get to the bottom of this.  Let me know if you have ideas to investigate.  My plan is to use trace flag 9292 and 9204 to find out which stats the optimizer is interested in,  Then create a new, empty copy of table Fact, transplanting the stats to the empty table.  And hopefully compiling the query against the empty table will take just as long.  If I can reproduce the problem in a completely clean context I'll have the most options for collaborative investigation.

A very simple validation query is being issued (below) - a filtered include index exists that satisfies all conditions with the first row returned.

And in fact execution time itself is very, very fast.  But... compile time is ridiculous.  Over 3 minutes.  Output from trace flag 8675 is below.  Time to compile was almost identical with and without trace flag 8757 added to the mix.

This system is SQL Server 2012 SP3. Because its a production system and production data, no windbg.  But if the issue is present in a query against an empty table with transferred stats, next step will be trying to port the empty table, stats, and problem to a dev instance :-)

The elapsed time for the session was almost completely CPU time - not dominated by waits at all.  There was some other activity on the server at the time of observation - but not much.  Here are the spinlock deltas from measurements before and after the query was executed.


That doesn't tell me much... since just about the only web search hits for SOS_BLOCKDESCRIPTORBUCKET are my own tweets wondering what they might mean :-)


An idea occurred to me - maybe this resulted from an overly full plan cache hash bucket?

I use perfmon a lot :-)
So I'm always looking for new patterns.
Today I just happened to graph these two perfmon metrics against each other.  Perfmon was collected with a 30 second interval here.
Its not too surprising that there is a difference.  But how could there be *more* read IOs per second for the default workload group than the total on the server? (See just before 4:00 for a great example.) 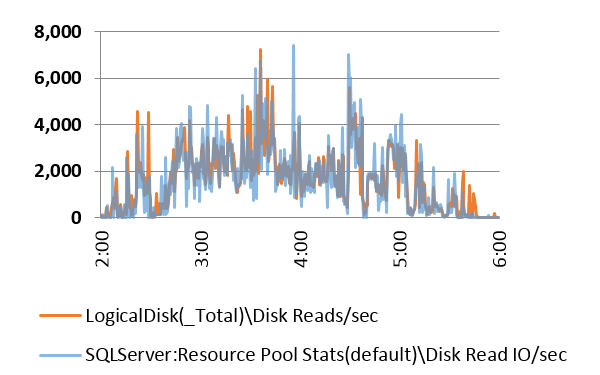 Maybe if I sum the two metrics over the 4 hour period they'll even out?

Works well for trending.  Not so well if trying to accurately count individual reads.

Posted by SQL_Sasquatch at 3:54 PM No comments: