*****
I'll stress that I use the -P<n> startup option for brief, targeted experimentation and observation only, on my laptop or in test instances.  I've never run a perf/scale workload test against an instance with scheduler count modified this way, and I don't plan to do so.  I'll plead with you instead to never let this startup option get anywhere near a production SQL Server instance, or an instance with workloads of any import. My stance and strategy is currently that its better to limit the "instruction entrance liability" of any one physical core and instead increase instruction intensity by tuning the workload and queries.
*****

The undocumented SQL Server -P<n> startup option (/P<n> if used in NET START command) instructs SQL Server to create <n> schedulers.  Until I tried it and started poking around, I thought the SQLOS schedulers would just be stacked on top of otherwise-existing SQLOS cpu, node, memory node, and processor group structures.  I expected that on my laptop I'd be restricted to a maximum of 64 schedulers since at the Windows OS level my laptop has a single processor group.  My main goals with these tests were to probe autosoftNUMA behavior at different scheduler counts-per-node and transaction log writer assignment at different node counts.

I learned a few things along the way. 😂😂😂

First, I created two tables in the [master] database.

Next, a stored procedure in the [master] database.


Add a .bat script with NET STOP and NET START commands for the SQL Server service, plus a sqlcmd command to turn the auto-start stored procedure back off after the desired tests, and all the pieces are available.


So, execute my batch script.  Then let's see the results.

I've highlighted some minor surprises above in red.  First, at 16 schedulers I expected auto-softNUMA to be active, but it wasn't.  The other two red boxes highlight scenarios with fewer than the 8 transaction log writers I expected.  I don't plan to investigate these percularities at this time.

Because my intent in these tests was to probe transaction log writer count and auto softNUMA behavior, that's as far as I need to go with this.  I don't expect to ever increase the scheduler count this way, so in my configurations processor groups should always be following the OS processor groups (unless I decide to do some future experiements similar to these.)

*If* I see a VM or physical server with SQL Server 2019 that has fewer transaction log writers than twice the soft\NUMA node count (up to 8), I'll investigate at that time.

Posted by SQL_Sasquatch at 8:19 AM No comments:

Will this difference matter?  I suspect there is a workload type that can benefit from this increase, otherwise I'd be surprised at the change.  If the horsepower of 8 transaction log writers is needed, then you might also want to know which schedulers share CPU with the transaction log writer hidden schedulers, in order to avoid them with busiest/most important queries.  That can be done, for example, by using affinity at the Resource Governor Resource Pool level.

I use this stored procedure to generate a 'USE PLAN' hint style query, based on the Query Store plan_id supplied as an input parameter.


Q
Posted by SQL_Sasquatch at 9:06 AM No comments:

Others in this series...

Summary of this post: comb through the surprise plans, finding an example that looks like the description of "morally equivalent plans"... and one that kinda doesn't.

A reminder of where this set of tests is currently.
In Part 2, the repro code was tweaked a bit, in order to no longer use a tempdb table in a CTAS statement ("SELECT... INTO", Create Table As SELECT) and to TRUNCATE results table between iterations rather than DROP. After 1600 iterations of the test query with some filler queries also executed with each iteration, 19 plan_id values were displayed in Query Store "Tracked Queries".

Attempting to force each one of those plan_id values from Query Store resulted in 2 successful forces and 17 uses of surprise plans!

A grid of all 34 plan_id values is below.  Two interesting things are highlighted.  In the blue box a single row is highlighted, where plan_id 195 produced plan_id 292 when forced.  That's unusual because it's the only example in the list where one of the original 17 plans produced another one of the 17 originals as the "Surprise Plan". The other box highlights two consecutive rows.  Plan_id values 814 and 899 both produced "Surprise Plan" plan_id 3250. 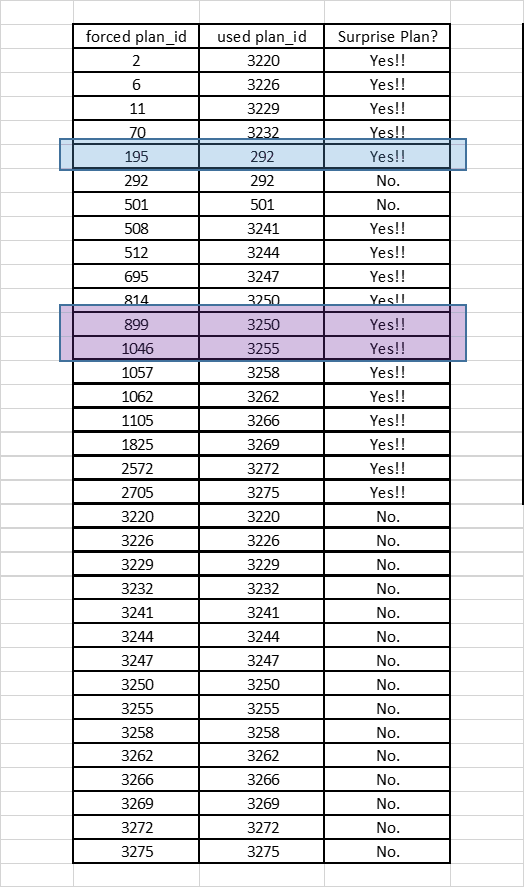 OK, let's see if any of those "surprise plans" resulted in a last_force_failure_reason_desc. 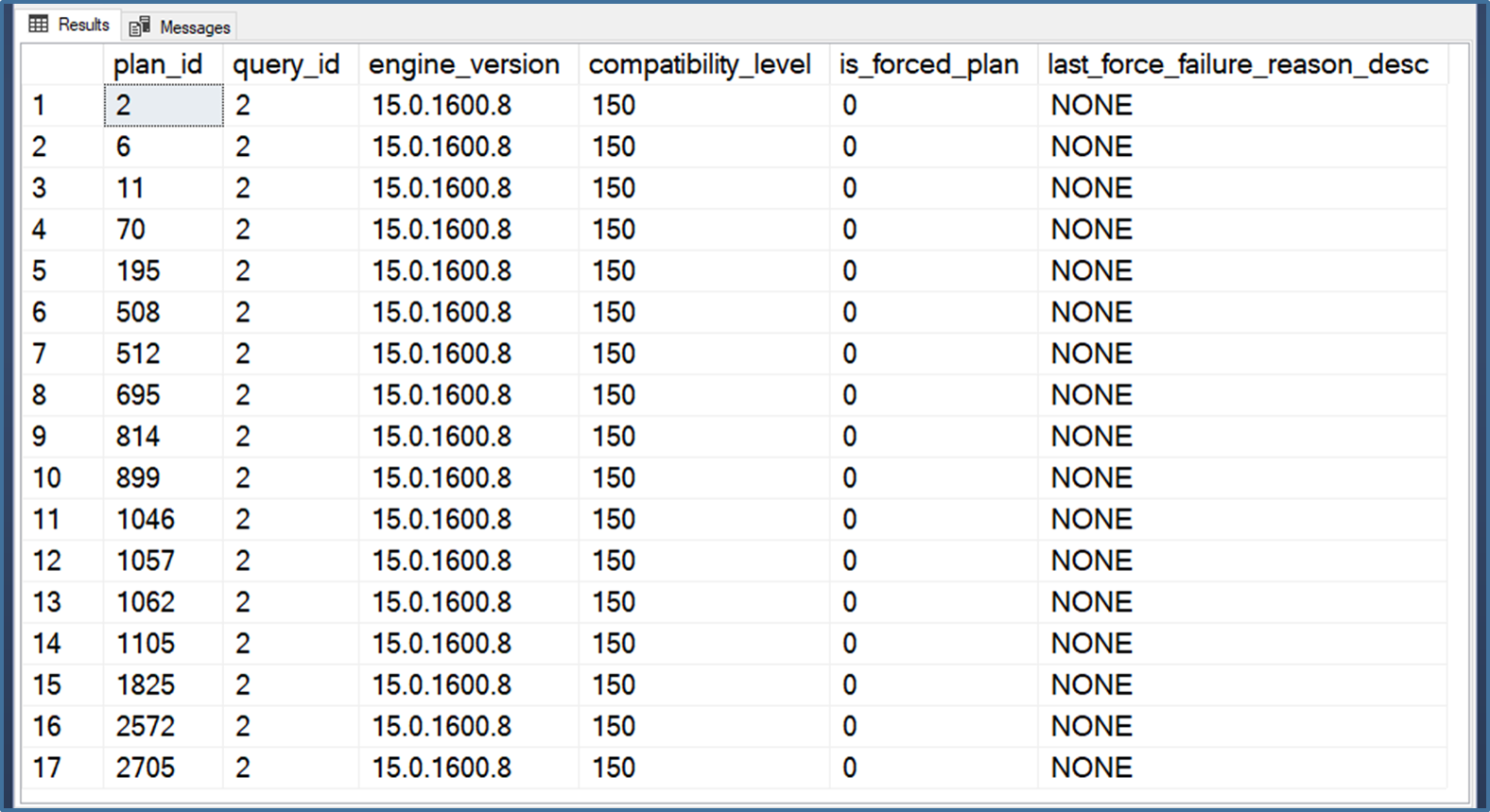 Nope, not a single one is listed as a "force failure", even though the plan forced at the time was not used.

That's pretty much what we'd expect from a "morally equivalent plan".  Both plans have the same shape.  All joins and plan operators are in the same location of the two graphical plans. 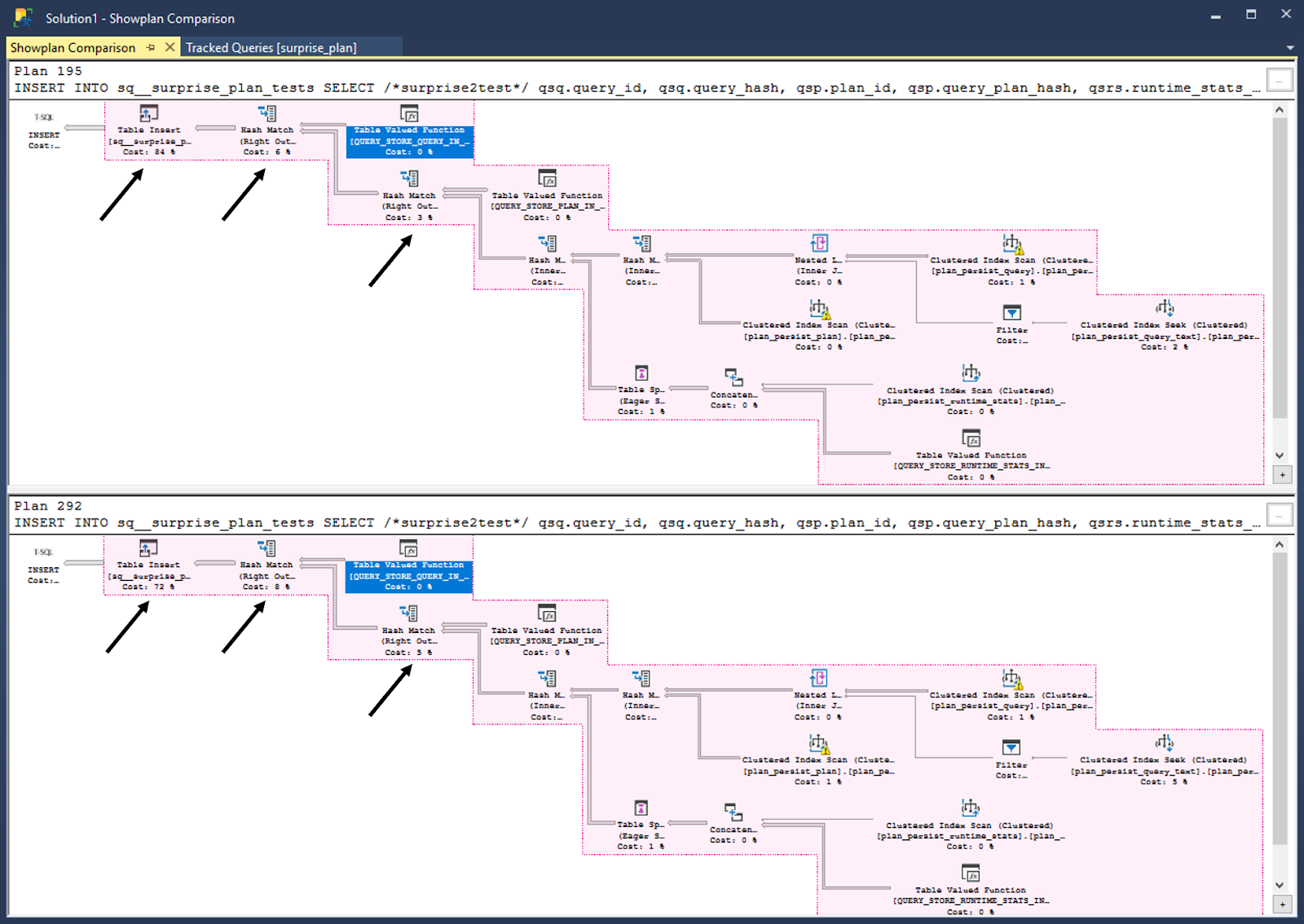 Was it due to a stats update?
Because the new CE is used, optimizer stats info is included in plan XML.  Here's OptimizerStatsUsage for plan_id 195.

And here's OptimizerStatsUsage for plan 292.

Here's a relevant passage from a blog post by Itzik Ben Gan.


Seek and You Shall Scan Part II: Ascending Keys
https://www.itprotoday.com/sql-server/seek-and-you-shall-scan-part-ii-ascending-keys

*This* definitely seems like the description I've heard of a "morally equivalent plan".  As estimates for various operators changed along with modctr, eventually the previous plan no longer "fit" even though the newer plan still had the same plan shape, with the same plan operators in the same positions. 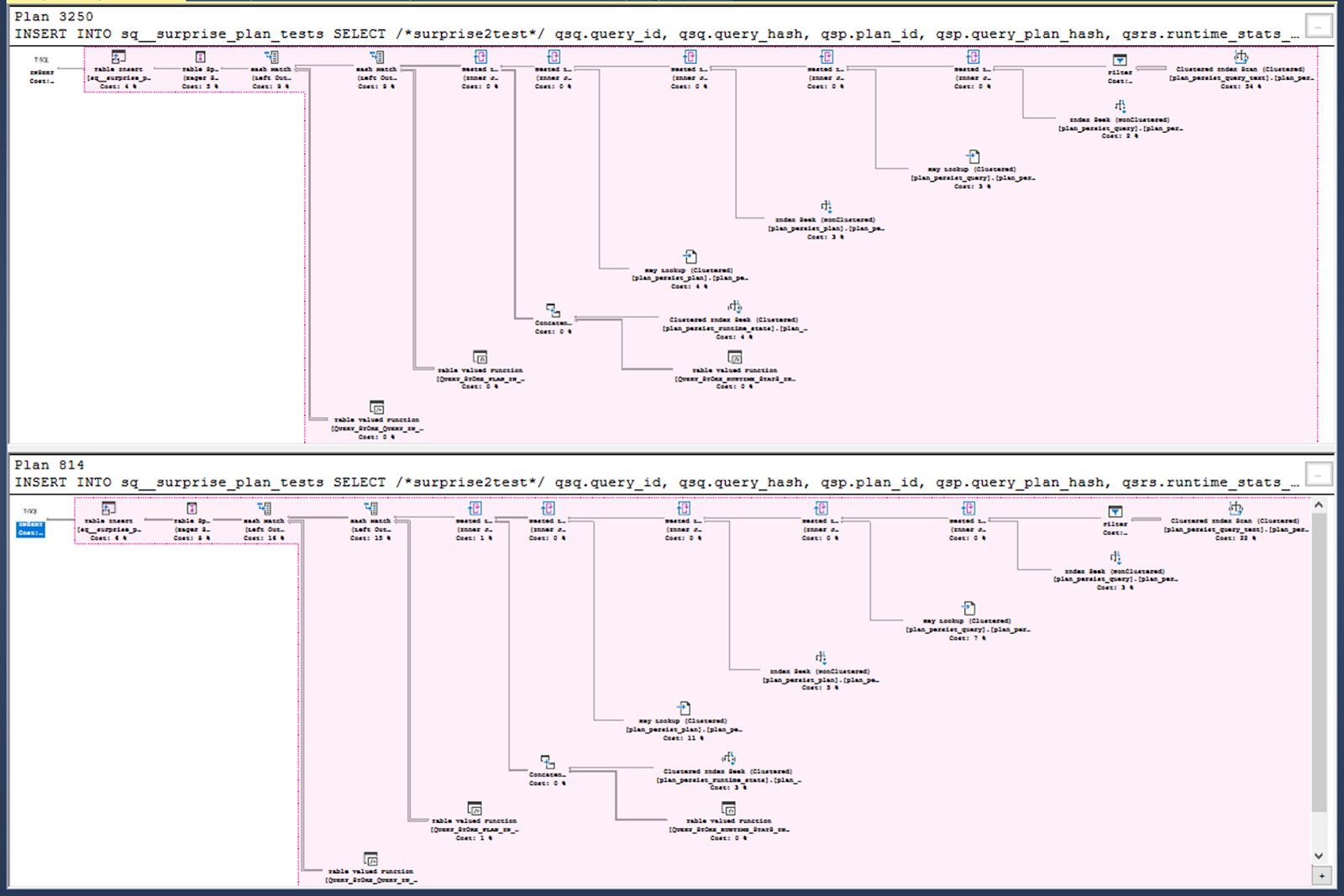 All operator in the same spots in the two plans, the difference between them being the estimates.  Its the same when comparing plan_id 899 to plan_id 3250.

But when I look at the planXML for plan_id 3250, I see something extraordinary.  The QueryHash value is the same as the QueryPlanHash value.

Nope, none of them have QueryHash = QueryPlanHash in the plan XML. 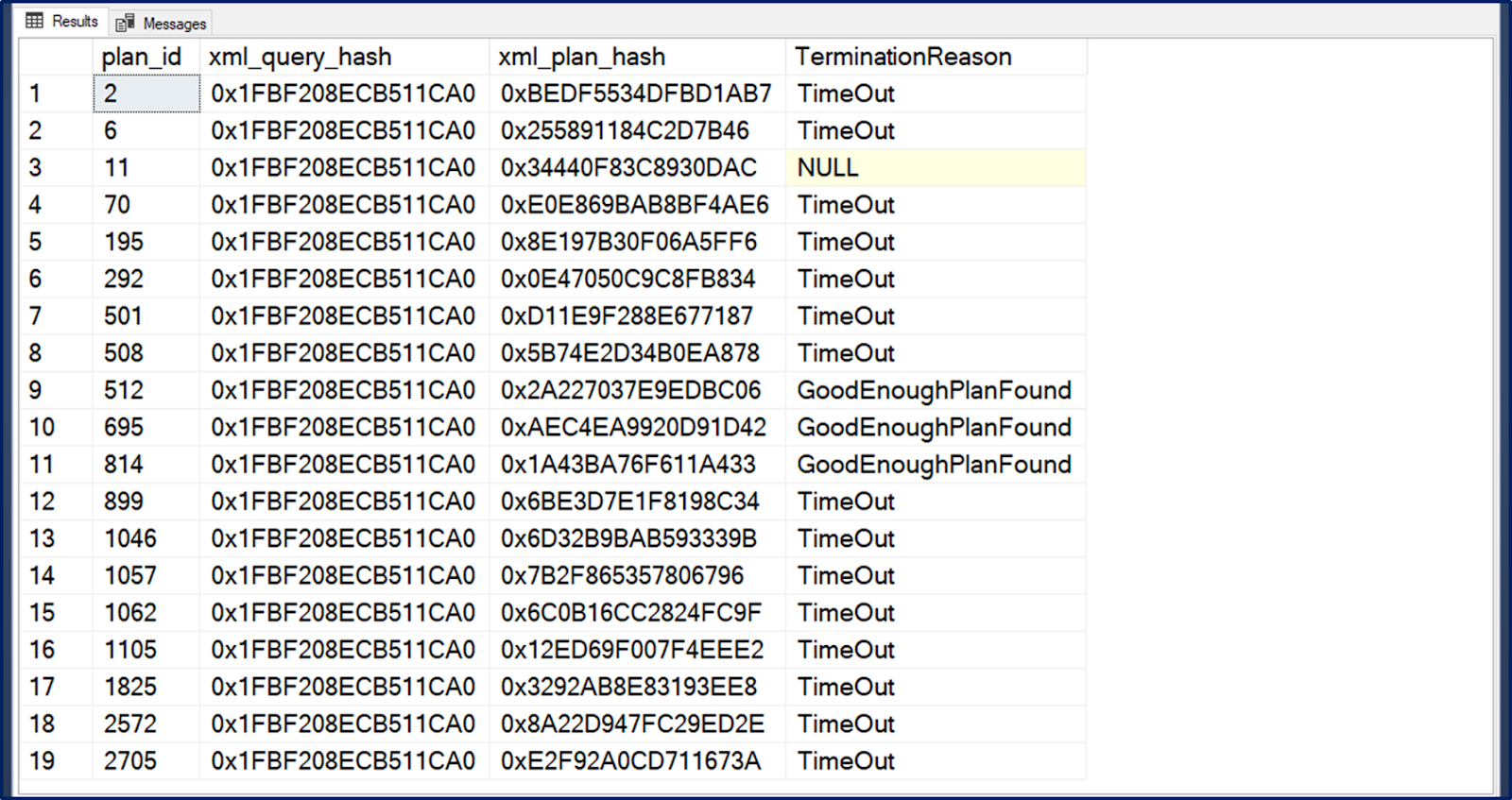 What about the 15 surprise plans that only showed up once we started forcing other plans?


Wow.  15 "surprise plans" first showed up after other plans were forced for query_id 2.  Every single one of them has QueryHash equal to QueryPlanHash in the plan XML. 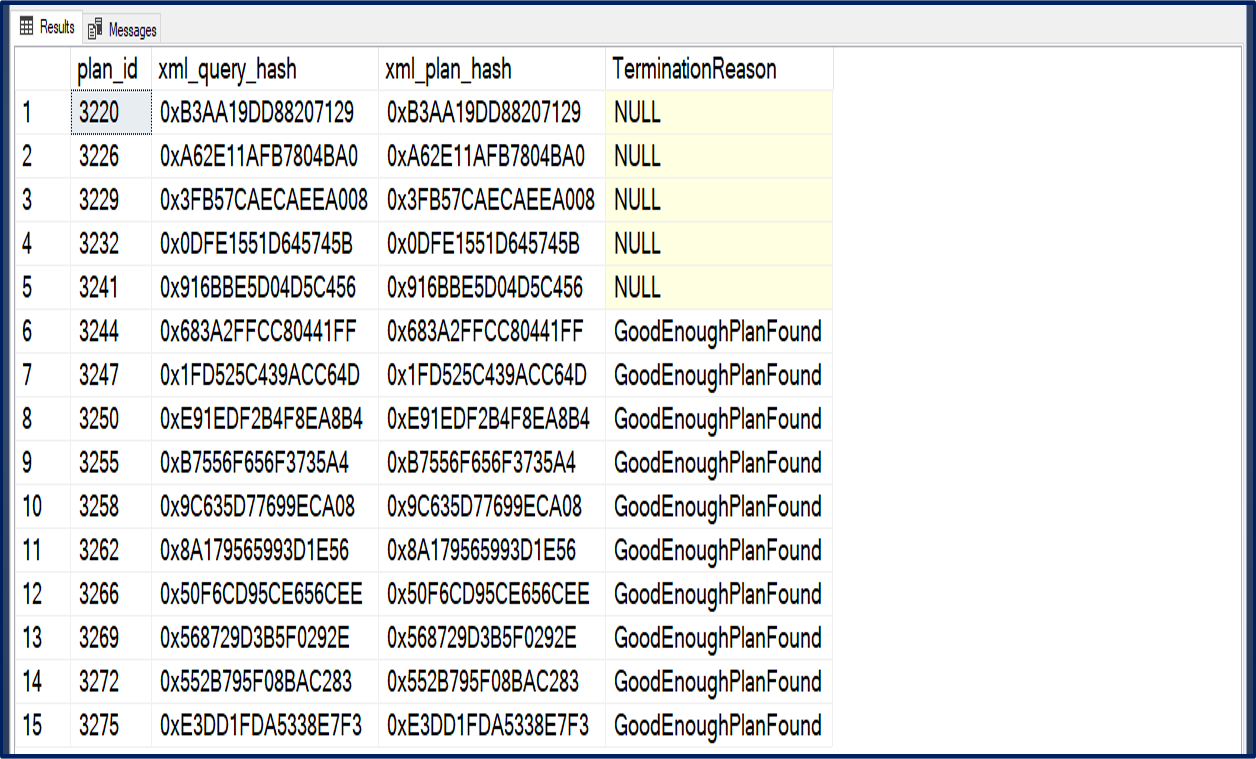 That is... hm.  So even if the forced query plan doesn't fit the estimates, or there's some other "near-miss" reason for avoiding the forced query plan... the QueryHash value in the plan XML should always be the same as [sys].[query_store_query].[query_hash].  Its not in this case.  And strangely QueryHash = QueryPlanHash.

(Microsoft hasn't yet confirmed this kind of QueryHash behavior is a bug... but I honestly can't imagine a design that anticipates or intends this behavior.)

Posted by SQL_Sasquatch at 9:40 AM No comments:

Part 2 Summary: the stored procedure was modified to no longer use "SELECT... INTO" with a table from tempdb, and to truncate the results table with each iteration rather than drop the table.  Of the initial 19 plan_id values for the test query, only 2 would successfully force from Query Store.  After trying to force all of the plans (including the surprise plans which first showed up and were used while another plan was forced), from the 34 total plan_id values, the tally stood at 17 plans which would successfully force, and 17 plans which would not.

One of my goals for problem repros is to eliminate as many extraneous vulnerable points as possible.  For example, when reproducing a problem with Query Store plan forcing, I want to remove as many known or suspected plan forcing issues as possible, other than the issue the repro is meant to draw attention to.

For these reasons I've reworked the repro which I'll be building on in these blog posts.

In my initial blog post, the test query used "SELECT... INTO" with a temp table.

The new version of the repro contains a CREATE TABLE statement before the test query, and no longer uses a temp table.

The stored procedure follows the same type of strategy.  Note there are now two parameters. @testQuery_reps indicates how many instances of the test query will be executed.  In addition to the test query itself, the stored procedure executes some additional queries to increase the rate of change in the Query Store structures.  @filler_reps indicates how times the 'filler query' section of code will execute.

The result... 19 unique plan_id values for the query from 1600 executions. 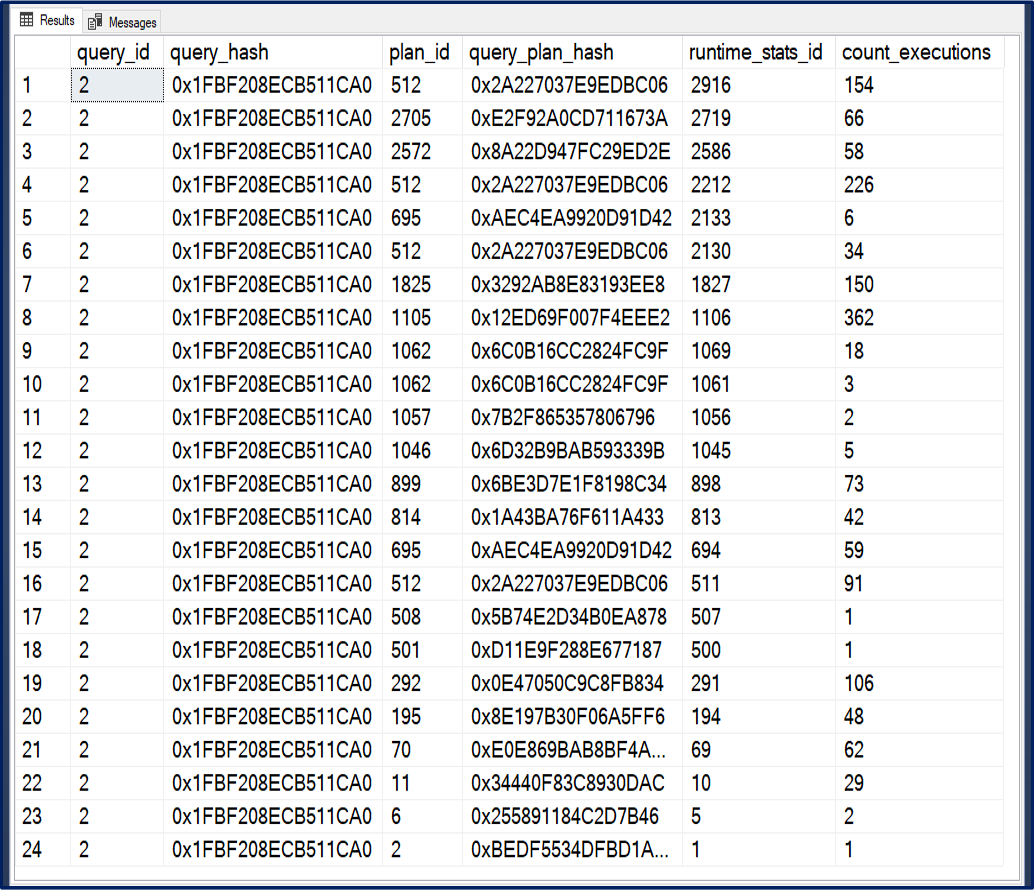 So let's take a look in the "Tracked Queries" Query Store activity. 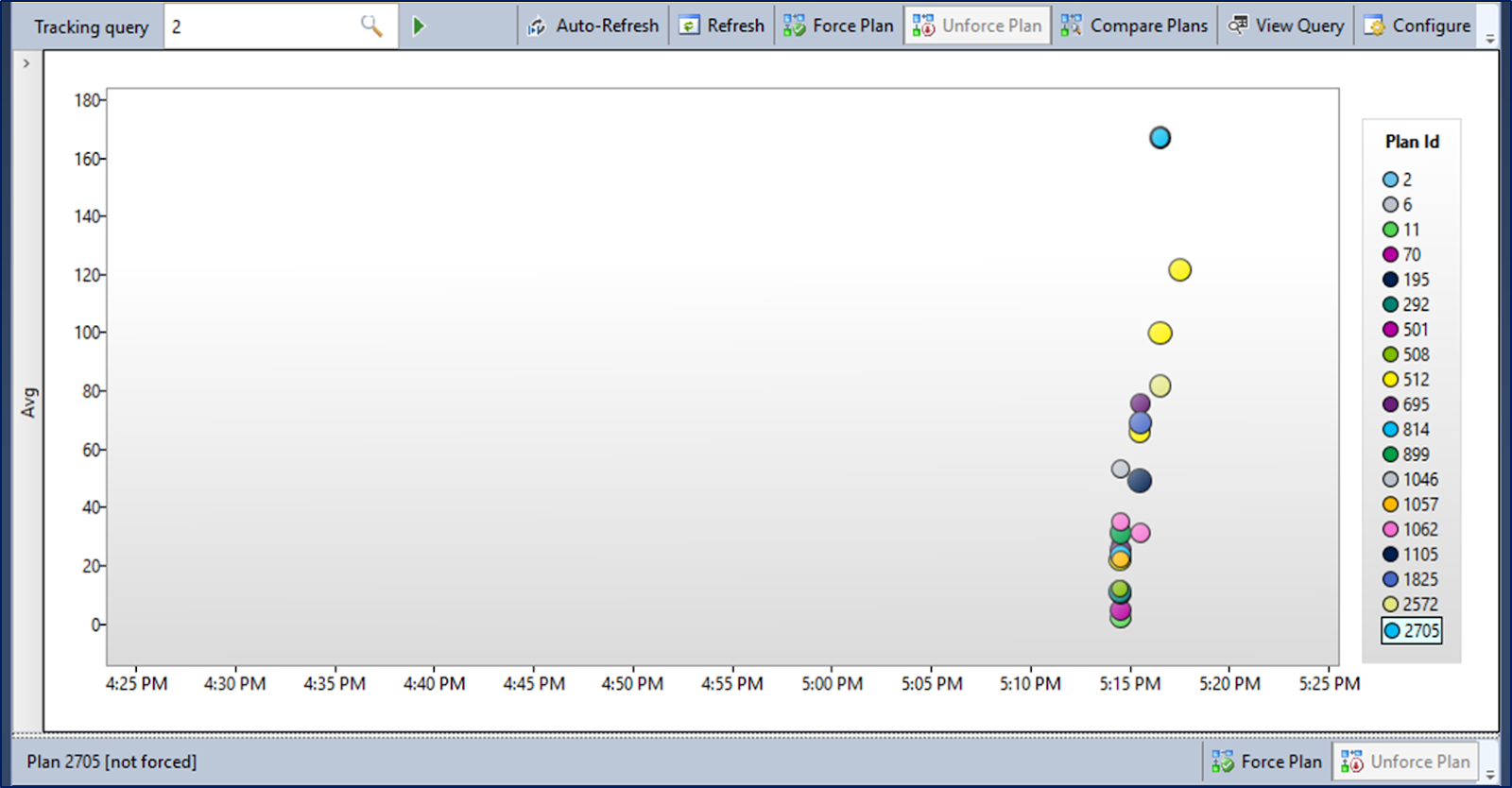 Interesting that the order of plan_id values in the right-hand legend is immediately sensible.  Let's see what happens when I force plan_id 2... 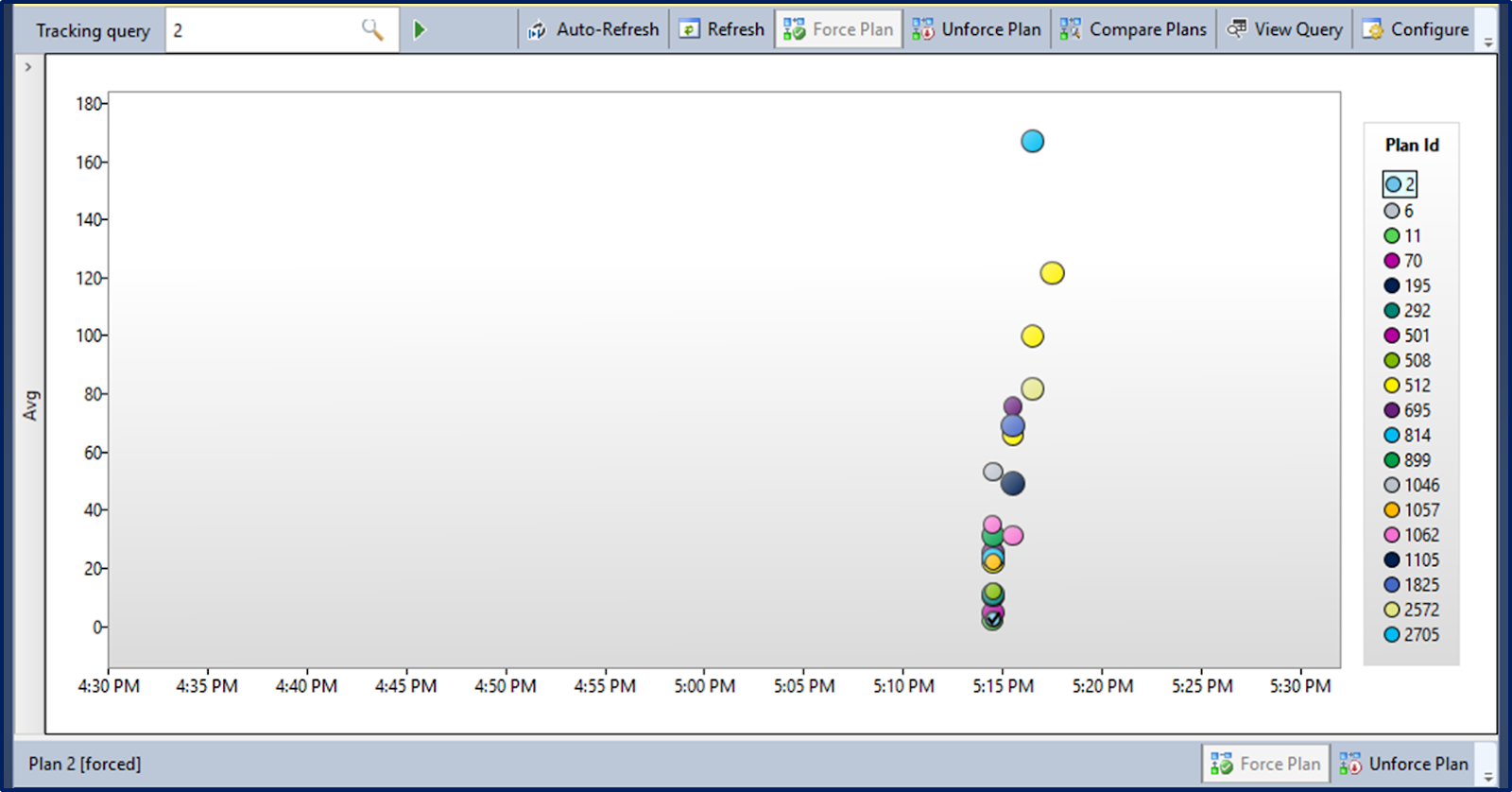 Well look at that! At the top of the results list is plan 3220 now. 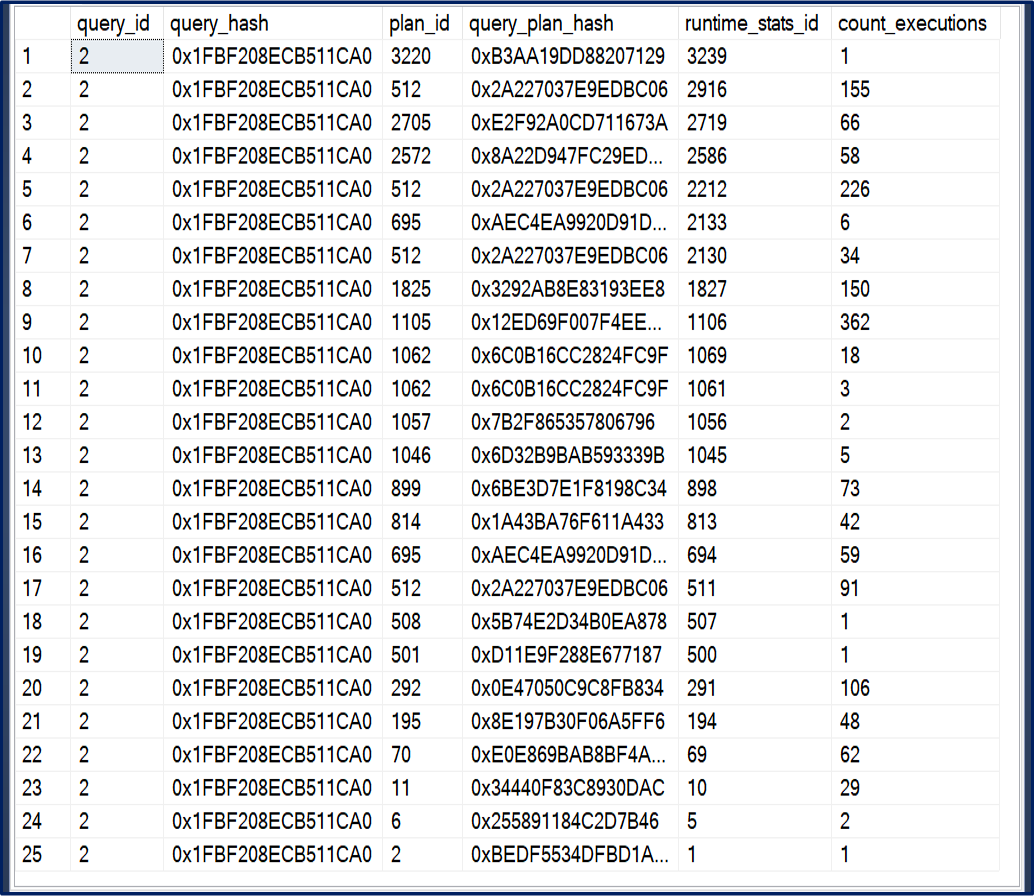 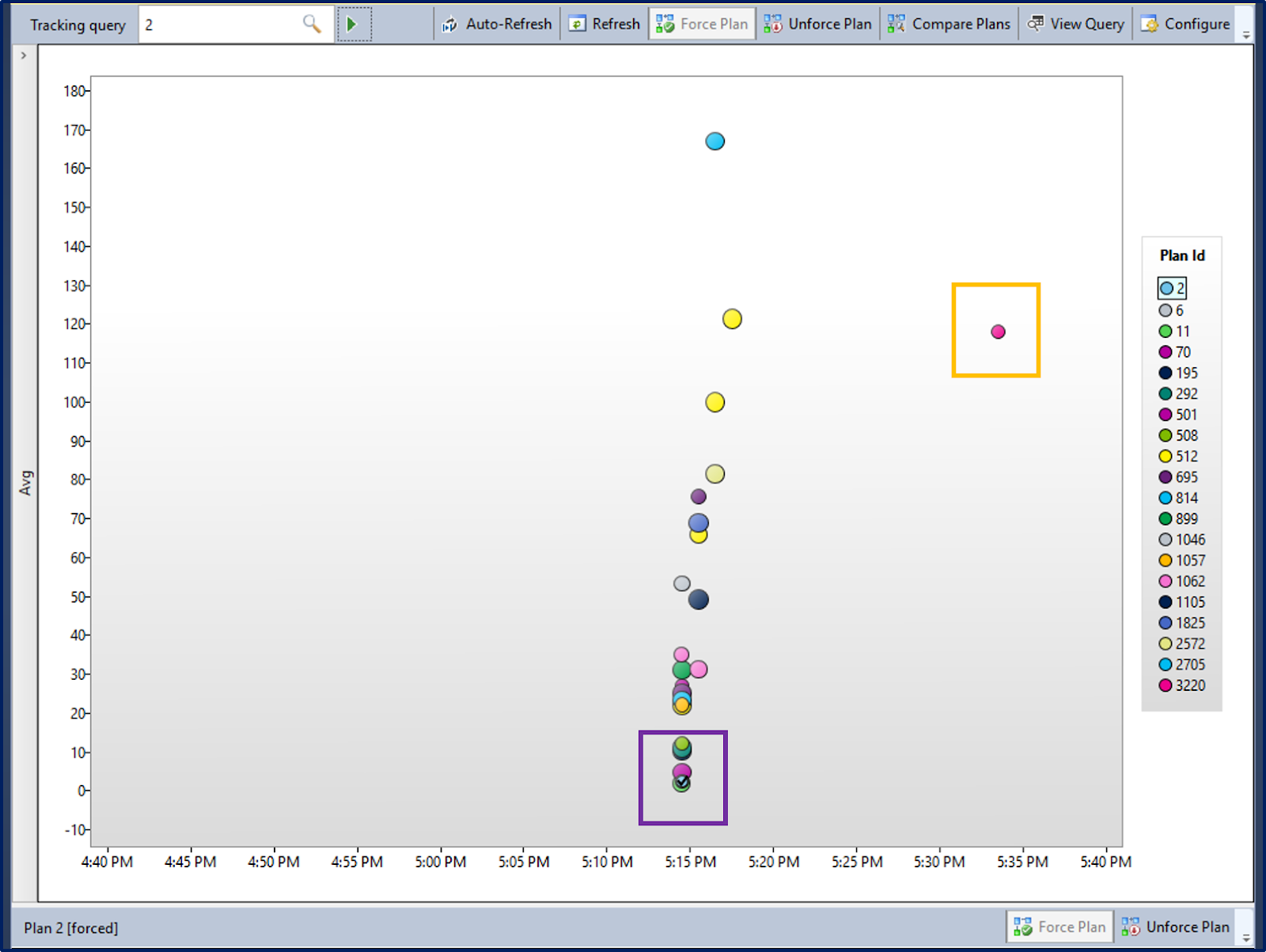 Ok, that's weird.  Did a last_force_failure_reason_desc show up for plan_id 2?

Kendra Little uses the term “morally equivalent plan” in some excellent blog posts, mentioning that the term likely came from Conor Cunningham via Erland Sommarskog.
I've listed those blog posts below, as well as a related Azure Feedback suggestion.

What is a “Morally Equivalent Execution Plan,” and Why Is It Good?
https://sqlworkbooks.com/2018/03/what-is-a-morally-equivalent-execution-plan-and-why-is-it-good/

So... something funky happened when I tried to force plan_id 2.  What if I try forcing the other plans for query_id 2?

Here's a grid of the plan_id values selected for execution after forcing each originally available plan_id for query_id 2. 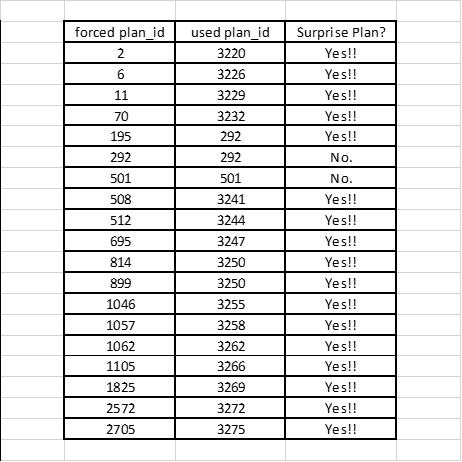 Of 19 query plans available from the first 1600 executions of the test query, only two plan_id values were able to be successfully forced: 292 and 501.  Seventeen of the original plan_id values were not selected by the optimizer after they were forced from Query Store. That seems like the cards are stacked against me.

But as the plan_id values were forced, new plans appeared.  Plenty of them LoL.  If I add in the new plans and attempt to force them as well... 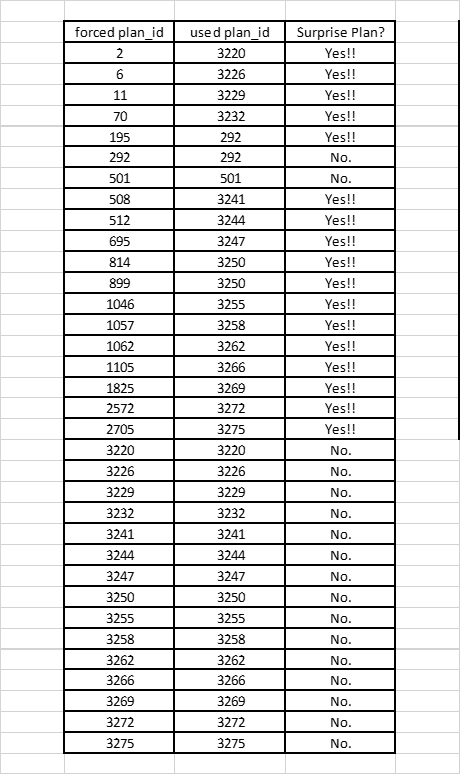 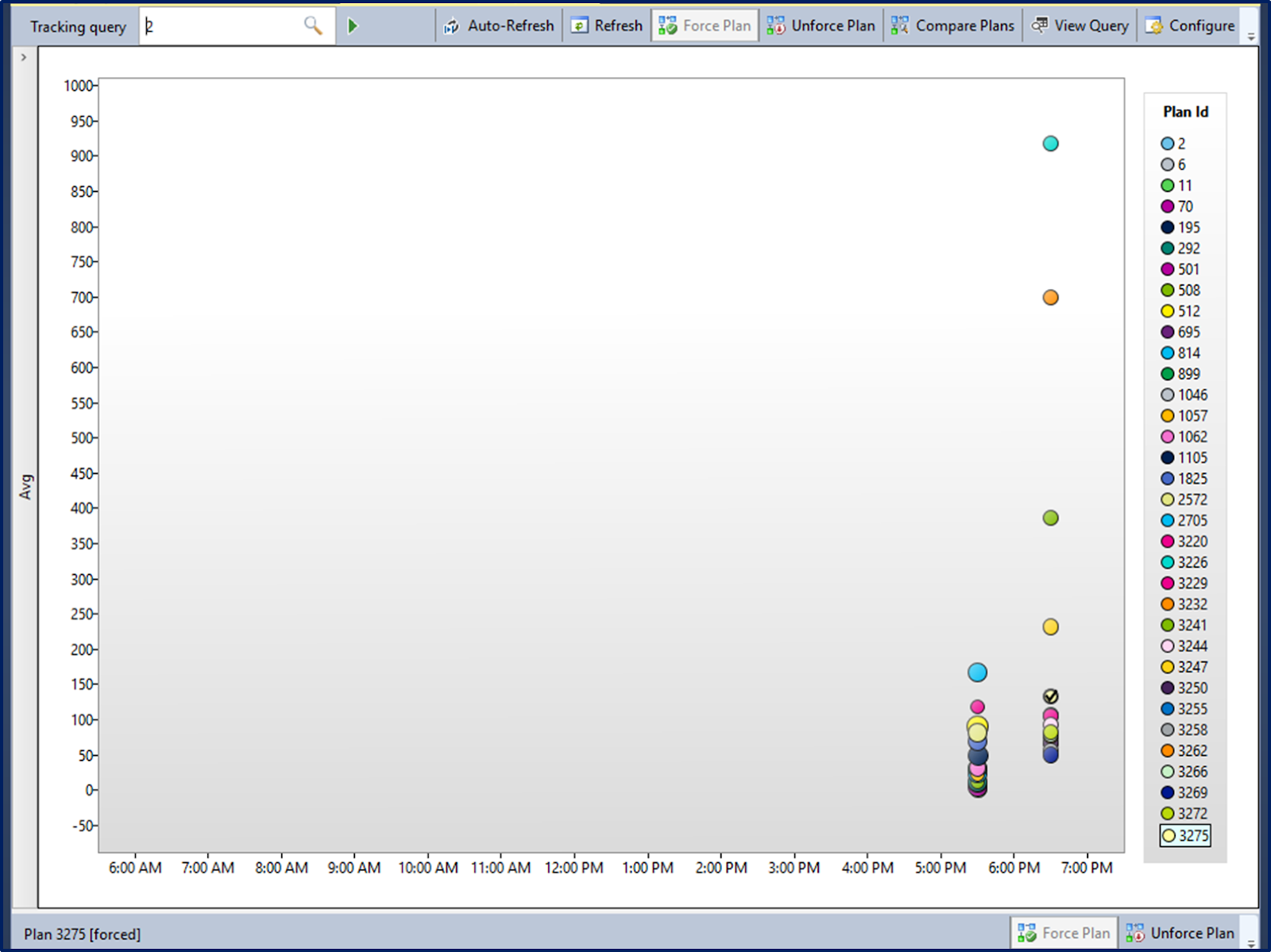 Ok.  So with this example I hope I've shown that, at least as through SQL Server 2019 CTP 3.0, encountering a “morally equivalent plan” choice after Query Store forcing a plan might not be as rare as commonly held.

If you're still with me, I've still got a little ways to go with this one... next installment won't be at least until tomorrow, though.

Q
Posted by SQL_Sasquatch at 3:54 PM No comments:

Part 1 Summary: pretty easy to get lots of Query Store plan_id values per query_id, and sometimes the sort of plan_id values in "Tracked Queries" is downright unhelpful.

For now, I'm working with a Developer Edition SQL Server 2019 CTP 3.0 installation, on my laptop.


OK, let's create a database just for this series of blog posts. No tricks up my sleeve, enable Query Store out the gate, change QUERY_CAPTURE_MODE from default AUTO to ALL, DATA_FLUSH_INTERVAL_SECONDS = 60 and INTERVAL_LENGTH_MINUTES = 1 because these will be pretty quick tests.


Now let's create stored procedure [surprise_plan1test] for some fun.  Nothing too clever here.  A query is executed against query store as dynamic SQL.  Do it as dynamic SQL so the offset is predictable and it always matches to the same Query Store query_id as long as context_settings_id stays the same. 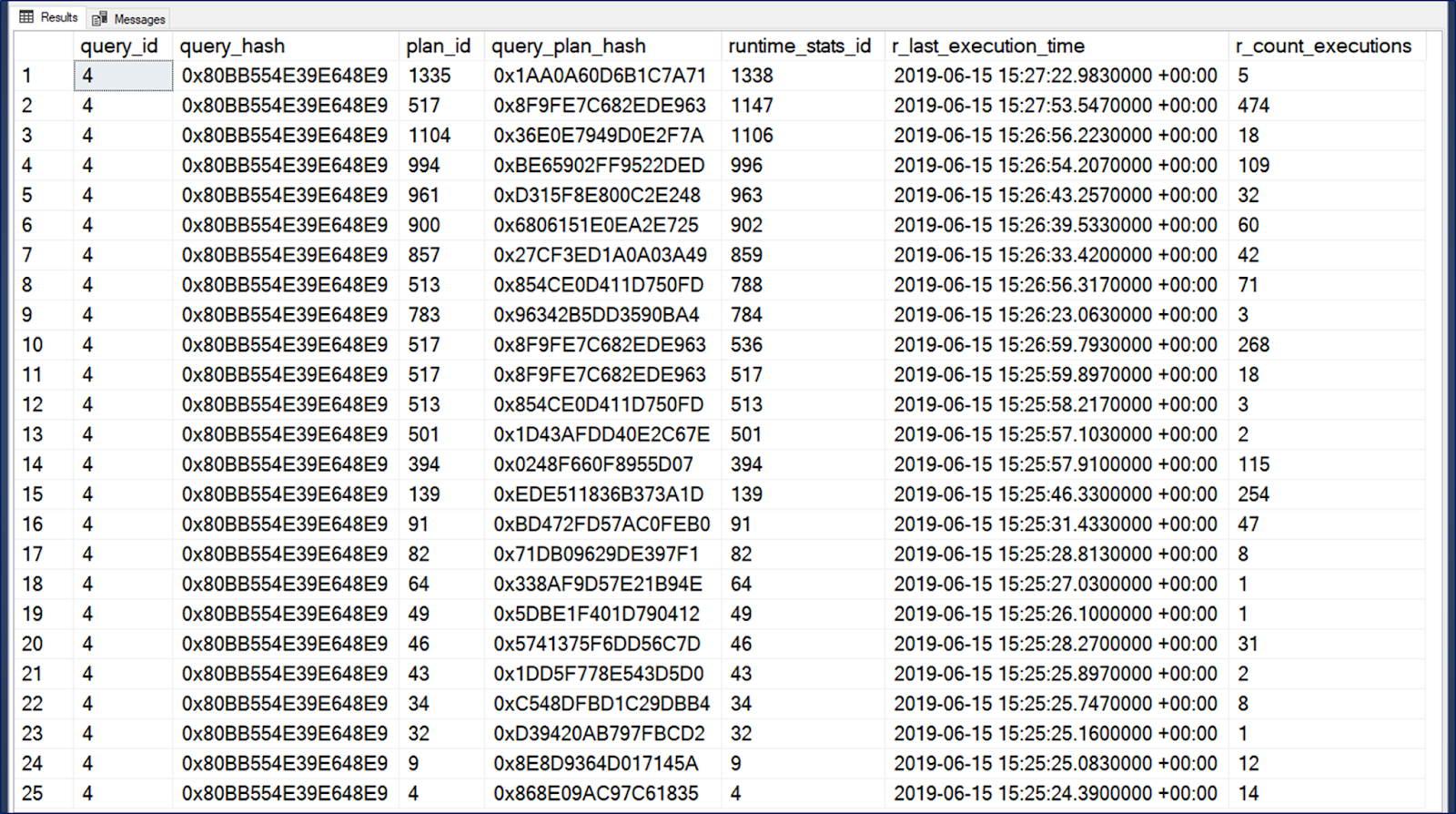 All right.  Let's head over to the Query Store activities. Since I know I'm interested in query_id 4, that's the one I'll pull up. 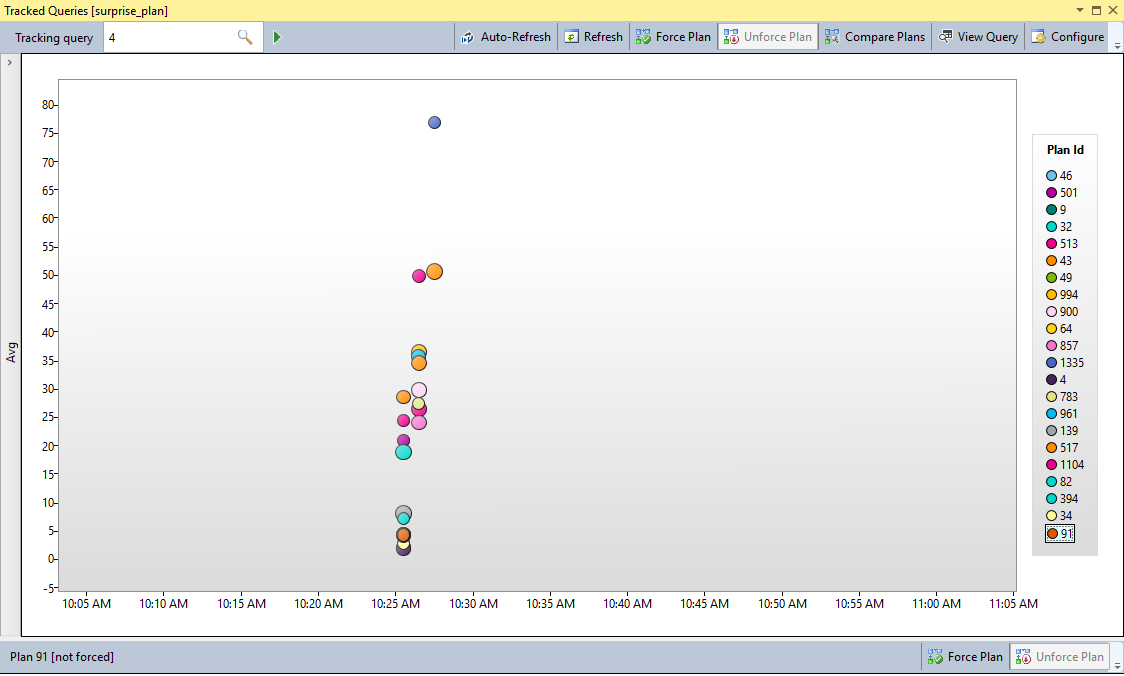 Yeah. That's a lotta plans in the right-hand legend.  22 of them.  In a not very helpful order.  In fact... though I've tried to figure it out, I don't know what type of order is used for that right-hand legend.  It's not chronological.  It's not based on duration which is the metric displayed by the graph. I dunno.

Usually with a few more executions of query_id 4 and a few refreshes of this activity, the right-legend becomes sorted in descending plan_id from top-to-bottom. And that's pretty durable.  But sometimes it switches back to this nonsensical (to me) ordering.

Got plenty more to show but I wanted to keep this blog post short as an introduction to what I'd be working with.

In the field, I see this quite often - a query_id with over 20 plans that show up in the Tracked Queries activity.  And the unhelpful ordering of plans in the right-hand legend, while a minor and fleeting inconvenience, is usability soft spot number 1.