Day-in, day-out i use perfmon to monitor SQL Server resource utilization and behavior, because its observer overhead is so low.

But its useful to have a few TSQL queries in the stable, too, for adhoc use or if a given memory state needs to result in some action taken within SQL Server.

i'm sure there's a clever wayt to use 'pivot', 'unpivot' and/or 'cross apply' to make this query more elegant. But i just wanted to get this here somewhere. if i figure out a more elegant way to get the resultset i'll update this blog post.
~~~~~

These results - in the order of their capture - are much more interesting. 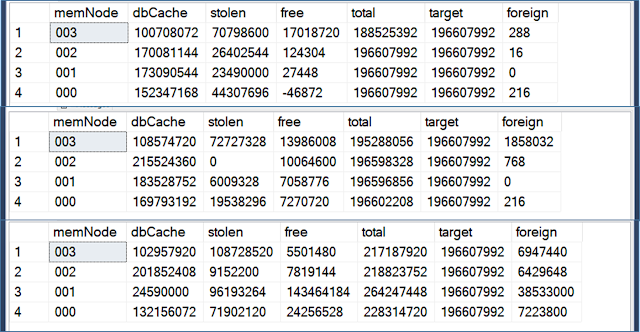 
Posted by SQL_Sasquatch at 7:45 AM No comments:

*****
This post is a continued look at some memory behaviors explored earlier in the following blog post.

The previous blog post gives detail around a significant performance degradation event experienced on a 4 node perf/scale test system. This blog post instead details observations from a production 4 node system.
*****

See if you can spot the unexpected system state below.  🙂

There is only 368 GB of vRAM on the vNUMA node.  Node 000 is accounting for [db cache] that alone approaches the full amount of vRAM on 3 vNUMA nodes!!

Got memory counted twice.  Comparing [stolen] memory from all 4 nodes to the instance-wide measure of [stolen] memory shows that something's up 🙂  On this system, nodes 001, 002, and 003 each have a portion of their memory which they account for as [stolen] but node 000 accounts for as [db cache].

There were no free list stalls during this period, thankfully.Somehow the instance is able to eke along keeping a small amount of free memory throughout.

But there is still a cost to pay for this unusual memory state.

I suspect that the cost of cross-node accounting and double-counting the memory is in part reflected by latch waits.

Posted by SQL_Sasquatch at 8:06 AM No comments:

Nothing to see here yet :-)

This is a place holder for a follow-up blog post to tonight's 5 minute intro to the value of a locally run perfmon black box, followed by the AMA panel with myself, Joe Obbish, and John Eisbrener.

Once there's something of interest here I'll tweet the link to give it a proper introduction.

My m.o. is to use a counters file. I typically keep the counters file in the same directory as my perfmon start script(s).

For example this text file lives at C:\perfmon\blackbox__counters.txt.

Note the final two lines - date and my name.  Because they don't match to legit counters these lines are ignored; i use this for commenting in my counters files.

The start script can be run interactively("Run as administrator"), but I also enjoy setting them to run on system start with schtasks.  It lives at C:\perfmon\blackbox__start.bat


The yellow box marked in the graphs below is unusual.  Although CPU utilization generally trends with both active requests and parallel workers in the [default] workload group, CPU utilization is far lower in the yellow box than predicted by the number of active requests or parallel workers.  The end of the yellow box coincided with an intervention step.  My quick-thinking colleague Joe Obbish issued a [dbcc dropcleanbuffers] and the recovery was nothing short of miraculous.  But certainly that's not an operation to execute frequently on a busy system.  I'll be referring to the yellow box as a "performance bamboozle" for the remainder of this blog post.  I've gotta do something to keep myself amused.  What went wrong - and why did [dbcc dropcleanbuffers] help?

Only two DOP 8 queries ran for the majority of the yellow box.  Lets compare their Query Store details to those of similar queries with the same query_hash values.  All eight of the query executions detailed in the following 2 result sets ran at DOP 8; the particular queries of interest are highlighted in red.

Wow.  All 8 queries returned a single row.  All 8 had similar CPU ms, physical reads, logical reads, tempdb use, query memory use. But those two highlighted in red had elapsed time roughly 20 to 30 times that of the other queries. What happened?

The workers for these queries spent the majority of the yellow box time in sleep_task wait.  Often sleep_task is often ignored as a benign wait.

Though perfmon includes details of several wait types in [\SQLServer:Wait Statistics(*)\*], sleep_task is not among them.

But perfmon offers other evidence of what was happening in those 2 queries.  Check out those free list stalls!!

Just in case someone out there loves a little perfmon math as much as I do...


It seems fairly intuitive that [\SQLServer:Memory Manager\Free Memory (KB)] would be pretty low when free list stalls are occurring.  And indeed that's what is seen in the graph below:the high plateau of free list stalls occurs during a valley of SQLOS free memory.

The changes in free memory across the SQLOS nodes almost seem to predict something...

OK, let's look at the [\SQLServer:Memory Node(*)\Database Node Memory (KB)] counters.
Interesting that almost no database cache is listed on node 002 during the performance bamboozle.

When looking at [Stolen] memory in the next graph, something doesn't quite add up.  Some memory in the instance is being double-counted by SQLOS: counted on one node as [db cache] and on another as [stolen].  I've blogged about that briefly in the following two blog posts.

The massive amount of [stolen] memory on node 002 makes sense given the almost complete lack of [Db Cache] on node 002. It still looks kind of unusual.

Now, when free list stalls occur, one way to replenish the free lists is for clean buffer pool pages to be evicted by the lazy writer thread(s). Page writes can make clean pages out of dirty pages 🙂

So, when free list stalls occur, I expect to see page writes coming out of SQL Server.  But there weren't many page writes during this performance bamboozle.  Lazy writer wrote out a few pages.  Notice that as lazy writer wrote pages, the number of free list stalls slightly decreased. Checkpoint writes occurred up to the start of the performance bamboozle.  But not during.

There were no background writer writes, because the active databases were using automatic checkpoints rather than indirect checkpoints.

The slow pace of page writes contributed to the performance bamboozle. Or perhaps share a common underlying cause.

Note especially the second large bout of free list stalls at approximately 10:15 am.  During that round of free lists stalls, SQL Server page writes and lazy writer writes were plentiful.  That's how I expect the system to respond to free list stalls.

The [dbcc dropcleanbuffers] that Joe initiated to end the performance bamboozle was able to do something that the lazywriter was not able to do.  It broke a logjam, freeing up a bunch of memory within SQL Server [total] memory and allowing the lazywriter threads to get back to normal work.

Many may already be familiar with the exceptional behavior shown in the next graph.  [Target server memory] is not as often enforced for SQL Server [total] memory as it used to be.  Batch mode columnstore queries especially seem prone to make [total] exceed [target].  This behavior is not unique to systems with multiple NUMA nodes; it can also be seen when there is a single SQLOS memory node.

Notice that [total] exceeds [target] almost immediately after the yellow box below, in addition to other times in the graph..

Description of [total] exceeding [target] can be seen in the following KB article, with a screenshot excerpt following. 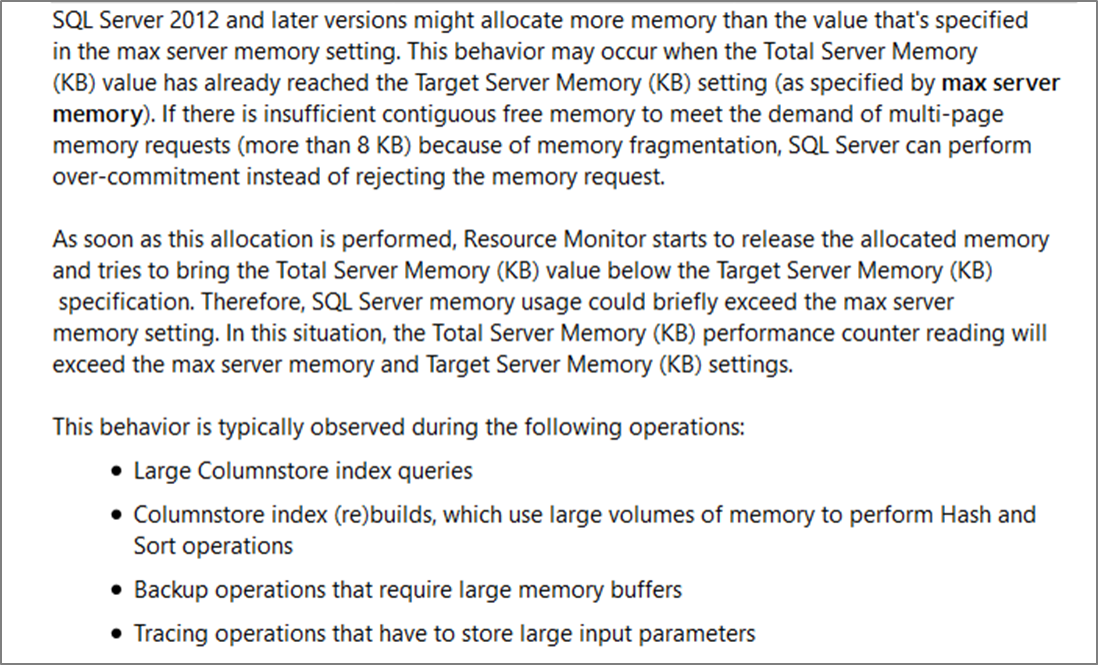 The persistent and accumulating [foreign] memory, similar to [total] > [target] does not seem to have been a contributor to the performance bamboozle.  Rather, the increase in total

Late(r than expected) allocation of top level memory blocks may have contributed to the performance bamboozle.


Posted by SQL_Sasquatch at 8:02 PM No comments:

No answers in this post, just a question I don't want to lose track of.

#sqlhelp [dbcc memorystatus] in #sqlserver 2017 cu13 gives information about IO errors. Is there another source for that error count or more details elsewhere? Nothing in the SQL Server error log, Windows event log.

Here are a few of the results I scraped.  Not sure if 'IO error' is a count of errors, or indicating an error code for the most recent IO error.  Though there's seemingly no information for errors with some of these numbers.  It may be a count of errors within each checkpoint, or somesuch.  The two busy databases in this instance are both using automatic rather than indirect checkpoints.

I'll update this post if I learn anything exciting in the future.
Posted by SQL_Sasquatch at 12:58 PM No comments: