At first I thought it likely to be a reporting error only - something that made the numbers not tie out unless it was taken into consideration.

Maybe such a condition could exist without bubbling up as a performance degradation or error situation?

As I continued to observe the issue, however, I took note of the ways this double-counting of memory could result in performance drag or errors.  I won't detail that here, but it is worth noting that KB4536005, which resolved this condition, lists out of memory errors as a potential consequence of this accounting error.

At about the same time as noticing that some memory was double-counted among the SQLOS nodes, I noticed something else.  Occasionally, one or more SQLOS memory nodes would report an outlandishly high number as the free SQLOS memory on that node.  The number was obvious nonsense as it was higher than the amount of vRAM available to the vm.

I rationalized this as probably the result of a race condition at a time of low free memory - values for two memory measures reported at slightly different times yielding a negative number which came through the performance object as an absurdly high positive number.  Because there were other memory issues to chase after, I was satisfied with the answer I provided myself, and willing to believe the condition could exist without any appreciable effect on performance or errors.

I've seen cases where that ridiculously high SQLOS node free memory values are reported on the same SQLOS node every 30 seconds for two straight hours.  I've seen cases where two of four SQLOS nodes are reporting the absurd high values at the same time.  Nope, doesn't fit the profile of benign race condition anymore.  Maybe I could just let it go if one of the SQL Server instances where this occurs doesn't also have active investigation for frequent buffer latch timeouts and for SQL Server seemingly failing to respond to low memory conditions.

In this post I will stray from my typical, graph heavy presentation. This one works better as tables, because the free memory involved is so doggone small compared to database cache and stolen memory it's really hard to find on the graph.

All of the tables below are from a single system, running SQL Server 2019 cu9. Perfmon is capturing lots of counters every 30 seconds. 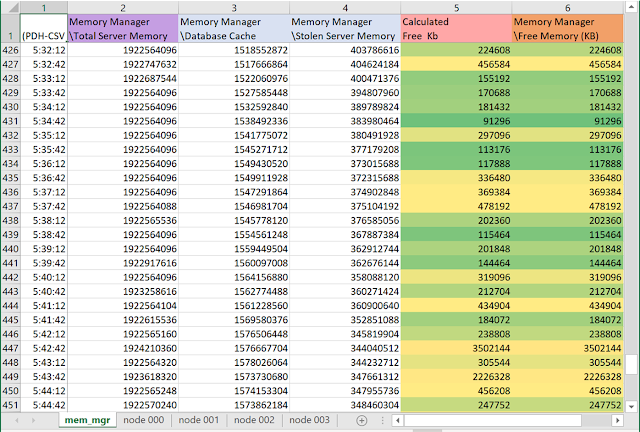 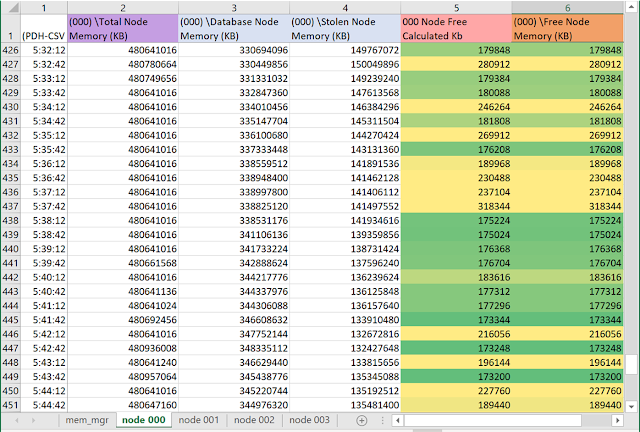 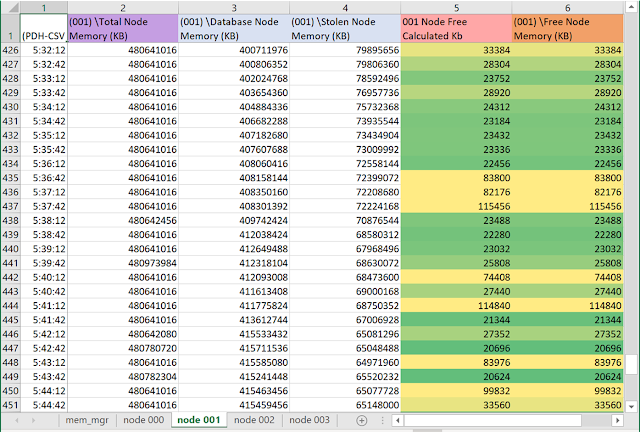 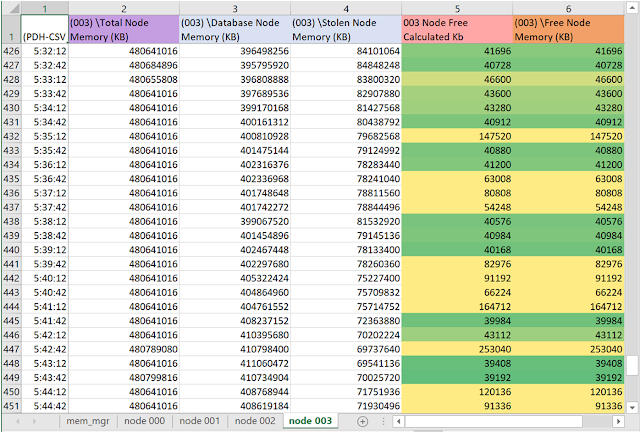 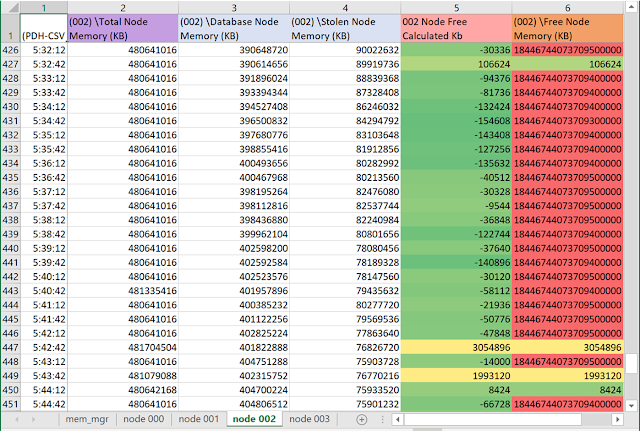 Considering that each of the 4 vNUMA nodes on this system has 640,000 mb vRAM, maybe the lowest value above of -154608 kb doesn't seem like it could cause that much trouble. That's about -150 mb.  And of course free memory can't really be negative. So there's a memory accounting error of at least 150 mb. How bad could that be?
Well... low memory condition signal is when less than 200 mb available memory, right?
In some cases, a memory accounting error of 150 mb could defintely cause trouble. Even on a system with a massive amount of memory.