Trace flag 2549 is no longer required for checkdb or checktable in SQL Server 2016++.

Trace flag 2562 may still benefit checkdb on a system (depends on disk characteristics and tempdb) in SQL Server 2016++, but is not expected to benefit checktable due to the already-limited scope of checktable activity.

2549 - by default checkdb (and checktable) before SQL Server 2016 planned its concurrent disk IO per Windows drive letter, in order to achieve a reasonable pace without overloading disk subsystems.

Trace flag 2549 was introduced to even the playing field - increasing the pace of checkdb/checktable disk io for systems using mountpoints.  This was done by planning the disk IO per database file, rather than per drive letter.

2562 - by default, checkdb groups the heaps and b-tree indexes into batches of up to 512 for its activity.

With trace flag 2562 enabled, checkdb puts all heaps and b-tree indexes into a single batch.

However tempdb is a serious consideration for this trace flag when checkdb is running without physical_only (when logical checks are run).

Tempdb use for logical checks increases until the batch of heaps and b-tree indexes is complete.  Watching tempdb use by checkdb on a system with many batches, tempdb use can be seen to increase as each batch runs, then drop with the start of another batch.

If all heaps and b-tree indexes are in a single batch due to trace flag 2562, tempdb use increases until checkdb is complete.

Another consideration with trace flag 2562: a single nonpartitioned table will not require more than one batch, it will already fit in a single batch.

So trace flag 2562 is not expected to effect the operation of checktable.

Posted by SQL_Sasquatch at 9:51 AM No comments:

*** This post was updated 2020 October 10 with some additional details at the end. ***
Today was kind of a rough day.  It started with a colleague asking if I knew any handy tricks that could magically make dozens of queries go back to the seconds or minutes they ran at under SQL Server 2012 rather than the increments of half-hours they were taking since an upgrade to SQL Server 2016. 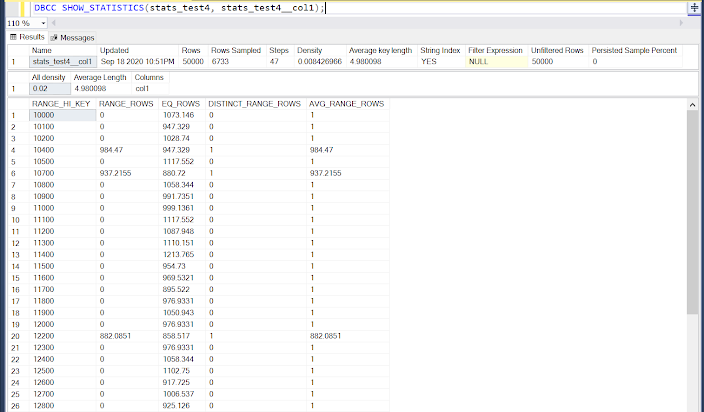 With additional testing, we learned that in SQL Server 2012 RTM this behavior did not occur: we tested up to 40 elements in the IN list and the estimate did not yet drop to 1.

I don't expect Microsoft to continue *enhancing* the legacy cardinality estimator.  This could be considered a performance regression, and if the organization were interested they could push for a change.  I'd expect, even if they were successful, the change to likely only appear in SQL Server 2019.  They've decided rather to change their code where applicable so that literal values in OR clauses or IN lists are provided in matching data type to the relevant column, avoiding the implicit conversion and also avoiding this potentially disastrous performance implication after the cliff at 19/20 elements.

Posted by SQL_Sasquatch at 10:42 PM No comments:

For a great introduction to this topic, please see this post at SQLSkills from Joe Sack.

Now let's create a very boring table and put 1000 numbers into each of 2 columns.
Because auto_create_statistics is on in this database, a little query will result in creating a statistic on col1.

And here is that statistic.

Now let's make that statistic stale 😆 A thousand more numbers oughtta do it.
All right.  Got a table with 2000 rows and a single auto-created statistics object that's now stale.
Let's create a snapshot database!!

OK... now for a query in the snapshot database...

Let's check those stats... now there are two stats and both are marked as temporary.

Let's take another look, and compare the stats in the source database and the snapshot database.
(*** update 2020 September 24 ***
this little trick where I reference dm_db_stats_properties in a different database by adding the database name to the reference works in SQL Server 2019 CU6.  But it didn't work on a SQL Server 2016 instance I tried the same trick on - looks like both references to the function resolved to the database context my query was in.)