***** Update *****
#CarefulWhatYouAskFor :-)
Paul White (@SQL_kiwi) was willing to take a look at this, and gave it a very thorough treatment in the blog post below.  Thanks, Paul!

Time for a surprise twist!  You'll remember that I am creating a table X_1 that looks like this: 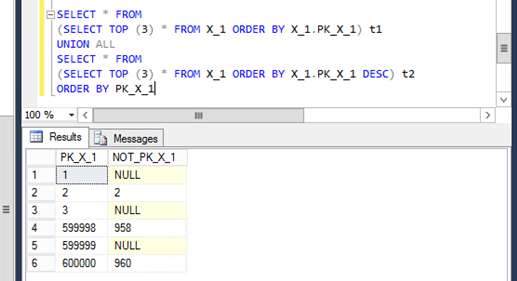 In my first post on this investigation you'll see the basic code I'm using to populate these tables.

Recall that the almost-innocent-looking query I am testing is this:


So - what happens to execution time of the query as I change the number and distribution of NULL values throughout the X_2 table?

Ready for the Shyamalan twist?

Maybe it looks like I went all the way to 32,000 rows in the graph above.  I didn't.  Let me dramatically zoom out to catch what happened at 32,000 NULL values and ZERO non-NULL values.

So... SQL Server isn't treating the query the same without the implicit NULL exclusion that accompanies the join on the NULLable columns.  But it doesn't REALLY cause a problem unless the column has only NULL values.  And then, only after a certain number of rows in the table.  And I haven't been able to tease out the problem unless I've got at least two joins.

Posted by SQL_Sasquatch at 4:19 PM