Recently I saw a question on Twitter #sqlhelp about backup buffers, asking if they came from the bpool or MTL.

I think the question is trickier than first realized :-)

MTL (or mem-to-leave) is at this point more of an historic term than anything else.  This term was most relevant in the days of 32-bit OS.  You can search old blog posts (not of mine) and old forum posts to see tons of fun related to 32-bit Windows and attempting to ensure that multi-page allocations and Windows direct allocations had enough available memory in the first 4 GB of address space. (Hunt around for "-g" startup option and "/3GB" switch to *really* appreciate 64-bit Windows & SQL Server.)

Now about the idea of "coming from the buffer pool."  SQL Server still uses the term "stolen memory" to describe behavior and within its memory accounting.  But in SQL Server 2012 and beyond, the bpool is a consumer of memory from the memory manager in much the same way as others.  So although the bpool may shrink in order that another consumer can grow, that's a process managed by the memory manager.  And the bpool is usually on the "need to shrink" side only because it tends to be one of the largest, if not the largest, consumers.

That's a pretty good question.  If you search around, you may find a number of posts where the conclusion is... "I don't remember if its included in max server memory or not." :-)

Let's see what can be learned with a quick little experiment.

Only if you have exclusive access to the memory resources on the server AND if a significant read load on the storage won't disrupt anyone.

What will happen if I run a backup to DISK='NUL' on a very large database with buffercount = 1024 and maxtransfersize = 4194304 (4 mb)?  Altogether, that should be 4 GB of memory allocation - should be quite noticeable.

Here's how things looked before the backup. 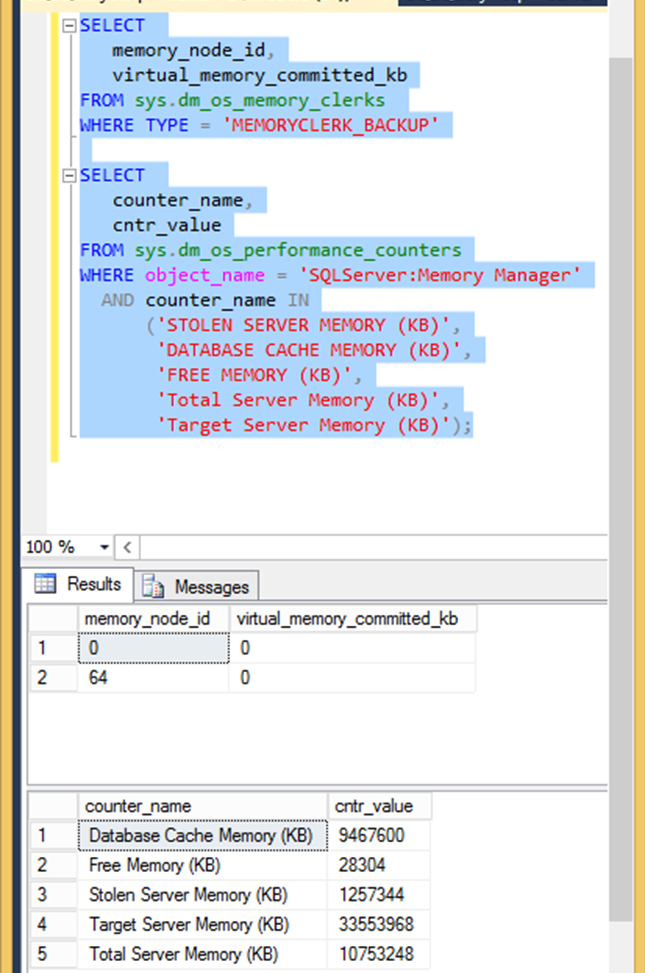 Kinda boring.  Memoryclerk_backup has nothing in node 0 or node 64.
'Total Server Memory (KB)'  is just a hair over 10GB, even though 'Target Server Memory (KB)' is just shy of 32 GB.  'Max server memory' is actually 120000 MB.  There hasn't been much happening in this instance for a few days.

Lets fire up a backup.

The test database is several terabytes, but in this case I'm writing the backup to NUL and I'll cancel the backup as soon as I learn what I want to know.

How do the backup memory clerks and performance counters look now? 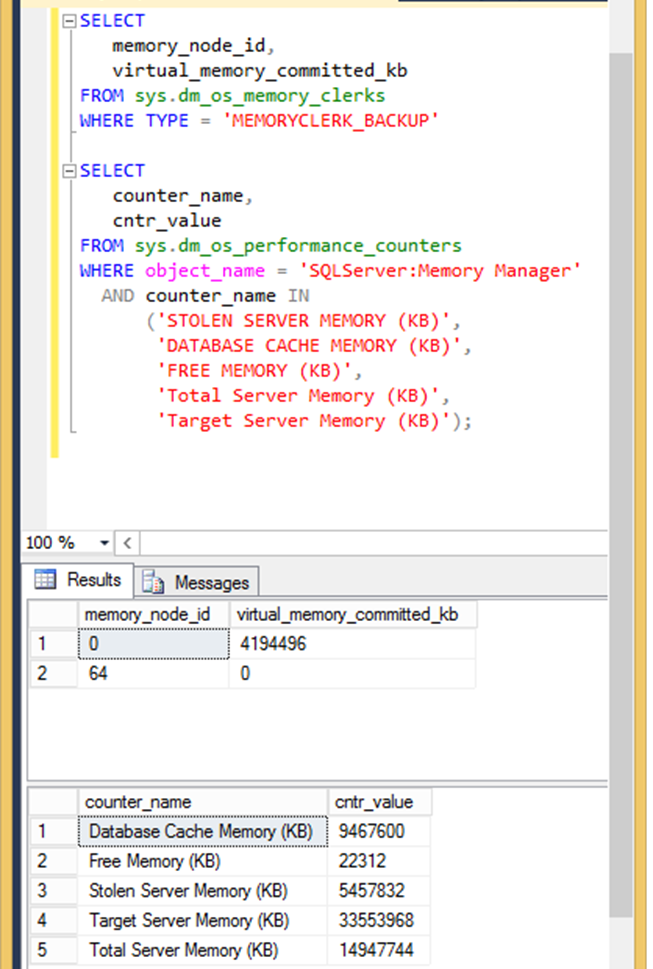 Whew! Glad that worked out :-)

So some memory really was stolen.  But it wasn't stolen from the bpool, which remained the same size during the backup (until I canceled it) as it was before the backup.  The additional stolen memory came from the free memory.

Now, because target memory in this SQL Server instance is so much lower than 'max server memory' (my VM got shrunk from 128GB RAM to 32 GB RAM and I never adjusted 'max server memory'), I can't say that I proved that backup buffers will always be from within the allocation governed by 'max server memory'.  Can I say it's left as an exercise for the reader?

It's late and I gotta get some sleep...